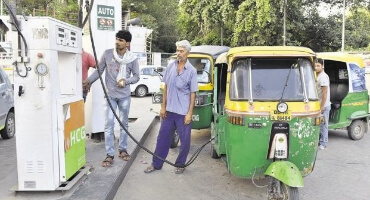 Mahanagar Gas to set up L-CNG pumps in Raigad district of Maharashtra, Sanwariya Gas is setting up one in Mathura and four on Delhi-Mumbai highway

A typical CNG pump receives natural gas through pipelines which is compressed and stored as CNG. An L-CNG pump, on the other hand, gets liquified natural gas (LNG) in tankers/trucks, which is stored underground, and turns to gas at the time of dispensing.

While Mahanagar Gas Ltd (MGL) plans to set up a few L-CNG stations in Raigad district of Maharashtra, Sanwariya Gas Ltd (SGL) is setting up one in Mathura and four on the Delhi-Mumbai national highway.

“We already have tankers and are talking about putting a dispenser to these tankers. We can replicate the model very fast once we get approval. It will kick-start usage faster and reduce the cost of laying the pipeline," Rajeev Mathur, managing director of Mahanagar Gas, had told Mint on 22 February, on the sidelines of an energy meet in Mumbai.

Separately, in an emailed response, MGL spokesperson said, “LNG as automotive fuel being in a nascent stage, costs of imported LNG tank mounted on vehicle are high and it is expected that with commercial production of such tank and equipment in India, use of LNG as automotive fuel for long-haul trucking and buses will be quite cost-efficient, comparative to other liquid fuels used in automotive."

The cost of setting up an L-CNG station is Rs5-7 crore, slightly more than what a CNG station costs. The requirement for land is more for an L-CNG station as tanks are required to be fitted under ground. These stations would largely meet the fuel need of trucks and vehicles plying on highways.

“We have begun work on setting up L-CNG stations. We are waiting for storage tanks and machinery to arrive from Germany. In six months, the stations would be up and running," said Surya Pratap Singh, CEO, Sanwariya Gas Ltd.

L-CNG, firms say, has significant advantages over CNG. One, as volume of LNG is only around 1/600th of CNG, it is easier to transfer to destinations or fuelling stations. Whereas a CNG station can come up only where there is a pipeline. Besides, fuel can be transported in trucks, directly from port to fuelling station. In case of CNG stations, the fuel station needs to be located near the city gas firm’s existing transmission line.

Also, L-CNG will be beneficial to users in hilly areas and eco-sensitive zones, where it is challenging for city gas firms to reach. Given laying of pipelines requires multiple clearances and approvals, an L-CNG station is a faster way to make automotive gas available in areas lacking pipelines.

In terms of cost, L-CNG and CNG are comparable.

CNG is cheaper than diesel and petrol. While CNG costs Rs42.63 per kg in Mumbai, diesel costs Rs66.95 a litre on Thursday and petrol costs Rs80.32 a litre.

Petronet LNG also plans to set up LNG stations on the highways. Prabhat Singh, its chief executive and managing director, had on 22 February told Mint that the firm is planning to set up a liquefied natural gas eco-structure in the country.

“We have identified highways of 4000km (Delhi-Mumbai-Bangalore-Chennai) where we would be putting up our 20 LNG re-filling outlets. We will start with a few thousand trucks and buses. Before that, we have spoken to the Gujarat state to run 20 of their buses and 10 buses of the Kerala State Road Transport Corporation. We are also talking to the Rajasthan government to run a few of their buses on LNG," Singh had said.

LNG vehicles can also be fuelled at L-CNG stations. Thus, L-CNG stations are equipped to cater to the demand of CNG as well as LNG as an automotive fuel.